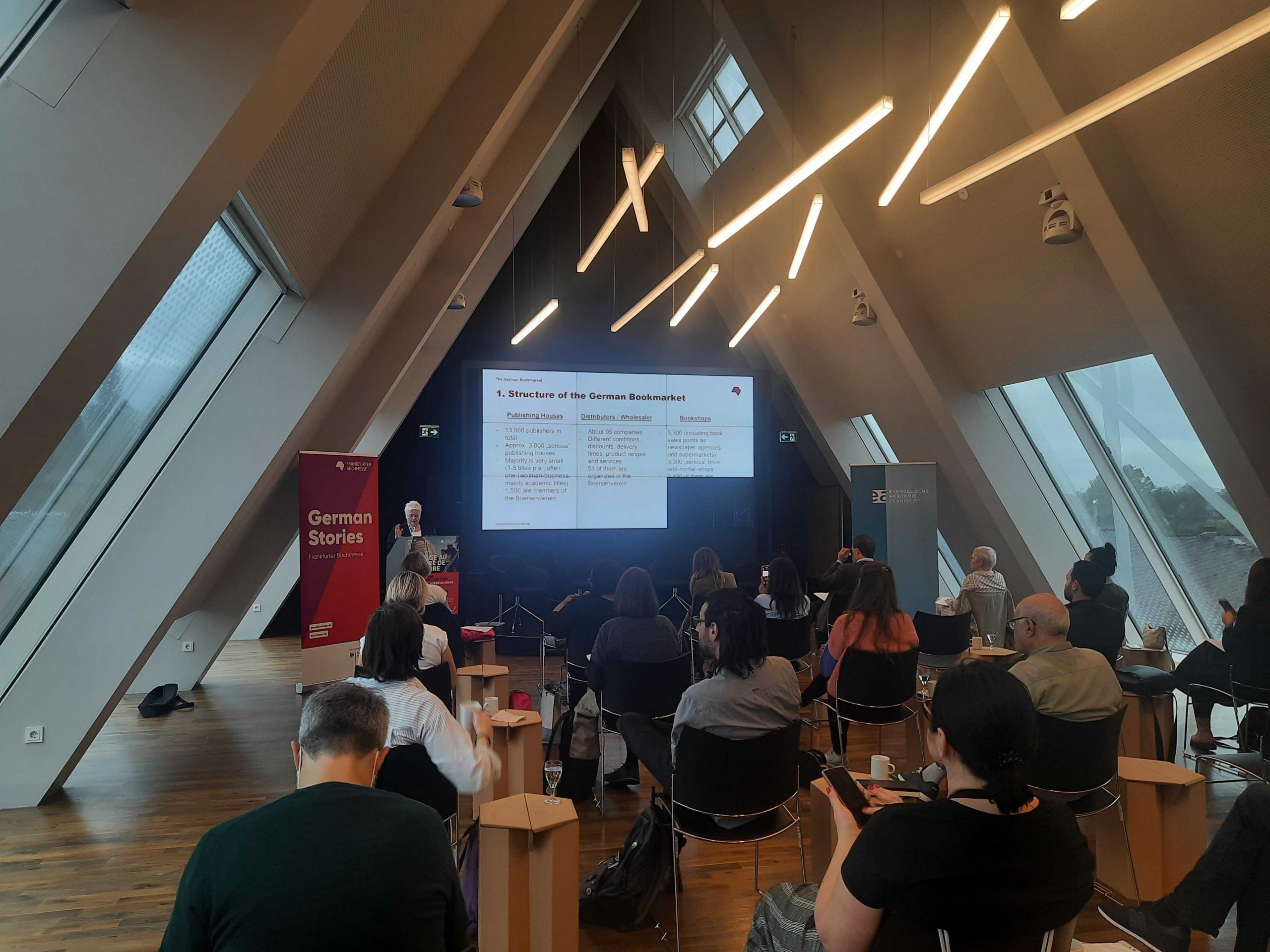 Experiencing the Frankfurt Book Fair for the first time

The incoming booksellers participated in a 4 day dedicated programme running from Monday, 17 October to Thursday, 20 October, where they got the opportunity to meet and exchange with colleagues from all over the world.

On Monday afternoon, the programme kicked off with an introductory session which took place in the Frankfurt Haus des Buches. Our booksellers got the opportunity to introduce themselves and their bookshops to a group of international colleagues. The specificities of each bookshop quickly sparked interest, with our booksellers enjoying an intense networking afternoon. The networking continued over dinner, which brought together book trade professionals from all over the world.

The morning of the second day of the programme focused on the German book market. Iris Hunscheid, Chairwoman of the Independent Booksellers’ Forum within the German Publishers and Booksellers Association (Börsenverein), introduced the German book trade and its particularities, and Stephan Schierke, Chairman of the Intermediary Book Trade Committee, spoke about the role and function of intermediary book trade in the country. The German Book Prize and its long list for 2022 were also introduced to our participants. In the afternoon, our booksellers participated in panels on children’s and youth books, as well as academic books, and they also learned more about social media marketing in bookselling.

After a fruitful day full of new knowledge, connections and forming friendships, the booksellers attended the Opening Ceremony of the 74th Frankfurt Book Fair 2022, which marked the official inauguration of this year’s edition of the Fair. With Spain being this year’s Guest of Honour, participants at the ceremony had the chance to witness the speech of His Majesty, King Felipe VI. Other speakers included German President Frank-Walter Steinmeier or brilliant Spanish authors Antonio Muñoz Molina and Irene Vallejo. And with a glass of bubbles after the ceremony, the Fair officially began!

Day 3
On Wednesday morning, our booksellers gathered at the Fair grounds for yet another day full of interesting presentations. Firstly, they had the chance to get to know the work of Kurt Wolff Stiftung, a foundation representing the interests of German independent publishers. After the first presentation of the day, the booksellers visited the stand of S. Fischer Verlag, one of Germany’s largest publishing houses, and afterwards, they were presented with the work of the Büchergilde association. The morning was completed with the presentation of Dussmann das KulturKaufhaus, Berlin’s landmark bookshop.

In the late afternoon, participants were given the option to attend a guided tour of the Fair grounds, after which, over a delicious meal, our booksellers all had the chance to get to know each other better, exchange ideas and experiences and share their love for books and bookselling!

Day 4
Thursday marked the last day of the dedicated programme – and our RISE booksellers had quite an early start. All of them got to attend the European and International Booksellers Federation’s (EIBF) annual conference, which brought together a list of speakers who shared their ideas about the future of bookselling with an eager audience.

From Enrique Pascual Pons, President of the Madrid Booksellers Guild and bookseller at Librerías Marcial Pons (Spain) who spoke on the topic of hybrid bookselling, through Jeff Deutsch, author of ‘In Praise of Good Bookstores’ and director of Seminary Co-op Bookstores (USA), Laura Karlsson, Director of the Finnish Booksellers Association, who presented the green initiatives in the Finnish bookselling industry, to Patrick Schneebeli, President of the Swiss LIBER Association who presented the LIBER project – the conference was packed with innovative insights. A roundtable with international booksellers – Aidai Maksatbekova (IQ Bookstore LTD, Kyrgyzstan), Katerina Malakate (Booktalks, Greece) and Joao Varella (Banca Tatui, Brasil), moderated by the UK & Ireland’s Booksellers Association President Hazel Broadfoot was the cherry on top for our group of booksellers, who were thrilled to hear about the experience of their fellow colleagues from abroad.

After the conference, we witnessed the speech of Ukrainian President Volodymyr Zelenskyy, who took the opportunity of the whole book trade being together to address the importance of book and knowledge in his current fight against Russian invasion. Hosted by the Federation of European Publishers (FEP), this exclusive gathering highlighted the need for the book community to keep on fighting for the written word.

And then it was almost time to say goodbye – but not before a delicious dinner at a traditional German apfelwein restaurant!

The event brought together a group of booksellers from all over the world, giving them a chance to network, share their love for their profession, form new connections, gain valuable insights, and establish new friendships. Hopefully, it is not a goodbye, but a ‘see you soon’!

Hey there, this is the default text for a new paragraph. Feel free to edit this paragraph by clicking on the yellow edit icon. After you are done just click on the yellow checkmark button on the top right. Have Fun!

We use cookies on our website to give you the most relevant experience by remembering your preferences and repeat visits. By clicking “Accept All”, you consent to the use of ALL the cookies. However, you may visit "Cookie Settings" to provide a controlled consent.
Cookie SettingsAccept All
Manage consent

This website uses cookies to improve your experience while you navigate through the website. Out of these, the cookies that are categorized as necessary are stored on your browser as they are essential for the working of basic functionalities of the website. We also use third-party cookies that help us analyze and understand how you use this website. These cookies will be stored in your browser only with your consent. You also have the option to opt-out of these cookies. But opting out of some of these cookies may affect your browsing experience.
Necessary Always Enabled
Necessary cookies are absolutely essential for the website to function properly. These cookies ensure basic functionalities and security features of the website, anonymously.
Functional
Functional cookies help to perform certain functionalities like sharing the content of the website on social media platforms, collect feedbacks, and other third-party features.
Performance
Performance cookies are used to understand and analyze the key performance indexes of the website which helps in delivering a better user experience for the visitors.
Analytics
Analytical cookies are used to understand how visitors interact with the website. These cookies help provide information on metrics the number of visitors, bounce rate, traffic source, etc.
Advertisement
Advertisement cookies are used to provide visitors with relevant ads and marketing campaigns. These cookies track visitors across websites and collect information to provide customized ads.
Others
Other uncategorized cookies are those that are being analyzed and have not been classified into a category as yet.
SAVE & ACCEPT